Last year I wrote a piece for McGill University's alumni magazine, McGill News, about graduates who had gone on to success in comics. Unfortunately, two of those interviews didn't survive the final cut; Canadians Mark Shainblum and Jordan Raphael. In the process of doing a much (much) needed update of my website this past month, I realized that I needed to rectify this. I have done so there, and now here (below).

Shainblum's story is classic punk-rock comics; start a comics company with no money or experience, while living in your parent's house. Of course he flamed out, but in the process he founded Matrix Comics and introduced the world to Bernie Mireault via The Jam and Mackenzie Queen. He also talks about the genesis of his own series, Northguard.

Raphael's story is equally intriguing. Now a L.A.-based lawyer, Raphael is better known as the Mark Zuckerberg of alt-comic, thanks to his work behind the scenes at The Comics Reporter and The Comics Journal, not to mention his co-authoring of Stan Lee and the Rise and Fall of the American Comic Book with Tom Spurgeon (as good a read out there about the towering and divisive comics legend).

Here he also discusses his role in Newbies Eclectica, McGill's little-known and short-lived alt-comics anthology (featuring early work by Mireault, Rich Tomasso and Al Columbia) that would have made William Shatner proud. Hope you enjoy the read - and let me know what you think. 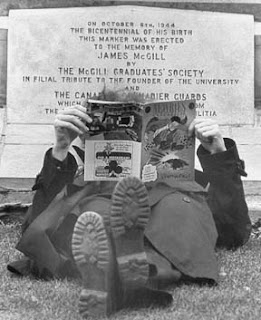