Another look at 'Now You're Logging'

After too many years, I have finally got around to writing an appreciation of Now You're Logging, a great long-gone graphic novel by the B.C. outdoorsman-turned-cartoonist Bus Griffiths. The essay (with art) is now up at The Comics Journal.

As I say in the piece, this book has haunted me -- in a good way -- for the better part of a decade, ever since Seth and Peter Birkemoe first told me about it. To describe it as being "out-of-print" seems like a half-measure: this book has been neglected. Among the first verifiable graphic novels in Canada (it started as a serial in a Canadian Whites comic during the Second World War), Now You're Logging is a wonderful hand-made gem of a comic that surprises and charms the reader on every other page. 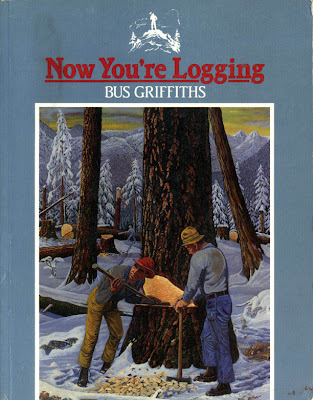 Griffiths was a self-taught artist, which is often a disaster when it comes to constructing good comics --but in this case his lack of formal experience resulted in a refreshing, innovative approach to the medium. His goal here was to create an accurate document of logging in the 1930s, before machines, when men climbed hundreds of feet in the air to lop down trees. His sheer devotion to this should be enough to make this book a classic, at least in Canada where its set. Heck, I'd be happy even if folks in British Columbia showed this book some love. But it's not the case: it's simply fallen off the edge of cultural relevance. For years now its publisher Harbour Books has maintained a Now You're Logging page on its website, despite the fact that the book is out of print. Good luck finding an affordable copy online.

You've got to wonder what Griffiths would think about his life's work being allowed to fall out-of-print for so damn long.
Posted by Brad Mackay at 10:10 3 comments: 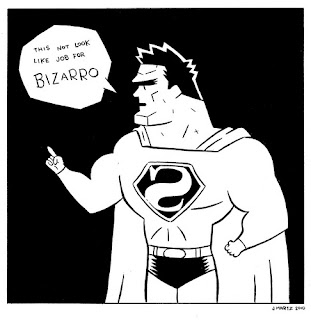 Review of 'The Death-Ray' in The Globe and Mail

Like you, I love me some Daniel Clowes. In the past decade or so the creator of the epochal alt-comics series Eightball has rightfully scaled to the summit (or close to it anyway) of literary comics, where he has proceeded to produce some of the medium's most thought-provoking works of art. Whether it's Mister Wonderful, Wilson, Ice Haven or Ghost World, the Clowes seems to have genuine insight into the human soul.

He even knows how to write good super-hero stories, as evidenced by his latest book The Death-Ray, which I reviewed this weekend for The Globe and Mail. 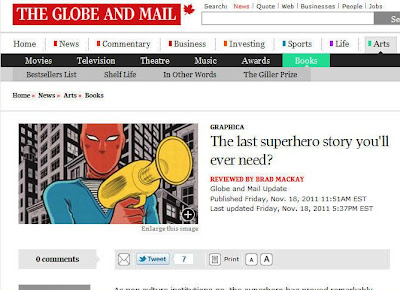 And I agree whole-heartedly with that headline. If this book isn't the last word on superhero comics for you I'll eat my cape.
Posted by Brad Mackay at 09:45 No comments: