I reviewed David Mazzucchelli's new (and very fine) GN, Asterios Polyp, in today's Globe and Mail. If you haven't read it yet, you really should. I'm usually pretty hesitant to fuel a book's hype, especially when it's going at full steam; but in this case AP lives up to its hype. 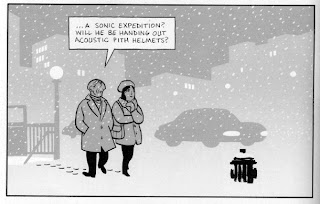 Growing up in the 70s/80s, I was a HUGE fan of Wacky Packages; so much so that I even drew a few of my own and mailed them to Topps. Still waiting on that one. My appreciation was only enhanced years later when I learned that Art Speigelman (of Maus fame) concieved of the series for Topps and did the art for many of the original product spoofs. So, i was rummaging around the internet this weekend for an uncut sheet of the original WP series stickers, and I found this terribly unfortunate puzzle (these were printed on the back of the sticker cards, and you'd have to collect them to complete the image): 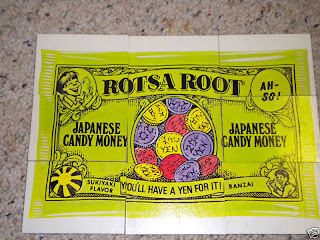 I vaguely remember this - and it seemed utterly normal 20 years ago to mock other cultures. That "ah-so" gets me; do the Japanese even say anything resembling this?

One of the best things about being the director of The Doug Wright Awards is discovering new comics and new cartoonists. One of my favourite discoveries from this past year's awards was Maids of the Mist by the talented Toronto cartoonist/tattoo artist/puppeteer Caitlin Black. I was literally handed this self-published comic the day of our nomination meeting, and it blew me away so much that I instantly added it to my short list.

The story follows two wayward teenagers (Misty and Leppard) as they endure another tourist-plagued summer in their hometwon of Niagara ("Nigraw") Falls. Anyways, the book made the Best Emerging Talent list at this May's DWAs, and Caitlin was so genuinely appreciative it made my heart melt. She was so appreciative, she sent this awesome hand-customized postcard as thanks: 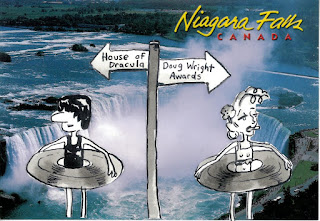 (That's Leppard and Misty, as drawn by Caitlin, affixed to the front.)
The kicker? The backside has a hand-written thank you note from Misty and Leppard themselves. So kewl! 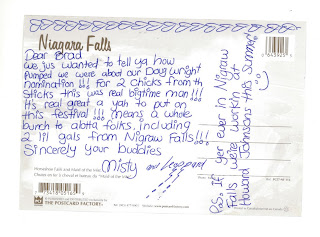 Plus, she included a Niagara Fall souvenir pen! Caitlin rawks!!!