A challenger to the KE7 crown?

Think Kramer's Ergot #7 is big? Of course you do.The latest edition of the revered alt-comics anthology has been wow-ing fans and annoying wives everywhere since it was released to much acclaim last fall, thanks to its its All-Star lineup (Seth, Adrian Tomine, Dan Clowes et al.) and it's gi-normous physical size. 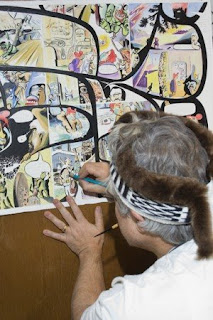 Maybe. Simply titled RED, Michael Nicoll Yahgulanaas's book of "Haida manga" (a term that the B.C. visual artist coined a couple of years ago) measures in at a jaw-dropping six feet by 14 feet! Or, 6.6 square meters for you Metric nuts. (That's a shot of it above.)

That's about 5 times larger than KE7; which weighs in at a paltry 16 x 21 inches (take that Harkham!) According to Yahgulanaas's publisher's site, RED is slated for publication this fall but I can't parse out what kind of print run they're planning. It kind of sounds like it's a one-shot gallery piece.

Regardless, they're billing it as "one of the world's largest comic books" which sounds about right to me. Seriously, though, you should check out Yahgulanaas's work; here, here and over here. He's a really talented guy, who has managed to merge native imagery and the comics form in a way that seems entirely natural.

I can't believe it's taken me so long to discover him.