If there's one thing I learned from my 10 or so days in Ethiopia it's that time has no meaning and generosity no bounds. Case in point: last Saturday Fatuma Ahmed Ali, a Ethiopian parliamentarian and the first lady of the Afar state, took me shopping in Addis Ababa after hearing me stress-out over the purchases I had to make (including for my wife whose birthday coincided with my return home). So, when Saturday morning rolled around she rolled up in her car with her charming nephew and niece and we headed out to the markets of Addis.

The joke here is that Fatuma told one of my colleagues that she'd have me back in 15 minutes; an impossible feat in a city like Addis. Minutes into the ride she asked me if I had eaten lunch. When I said Yes, she asked if I wanted to eat a second lunch - she was not joking. As I quickly learned, the Afar are very generous; more generous than an Italian/Jewish grandmother. Their need to please is ever-present and boundless. After insisting that I was not hungry, we drove about 20 minutes to a market somewhere in town (preceded by lots of dead-ends and sharp turns). 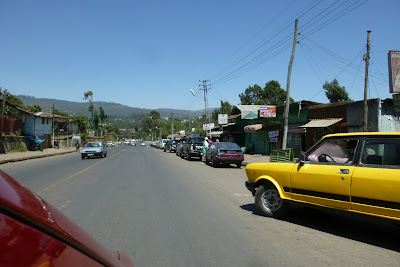 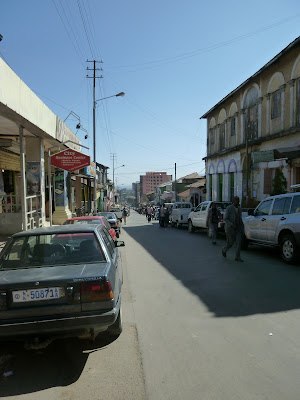 Once we were there we hopped out and Fatuma quickly made a bee-line to a clothing store where she proceeded to pick out silk scarves for my wife, my mother and my mother-in-law -- and anyone else who might need a gift. Then we moved on to dresses (for my daughter) and a traditional Ethiopian suit for my son. Some trinkets followed - and some shirts, and some souvenirs. When I pulled out my wallet to pay, her driver and accountant jumped between Fatuma and myself as if I was brandishing a gun. They take their generosity very seriously here.

After an hour or two of shopping we were driving again -- i assumed back to the hotel. It was not to be. Instead we ended up at an Italian restaurant for lunch (of course). I chose a safe menu option: spicy tuna pasta. 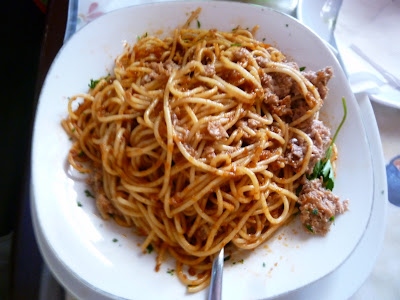 Our driver went for some tibs (beef), also good. 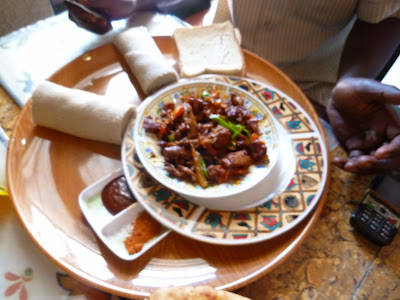 But the kids, being smart and fearless, ordered some pizza. They ignored my please to stop as I tried to snap a photo. 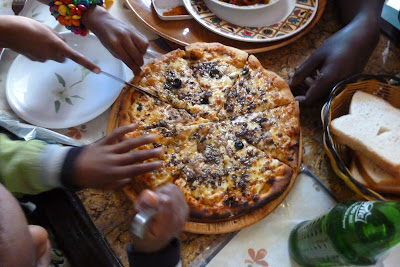 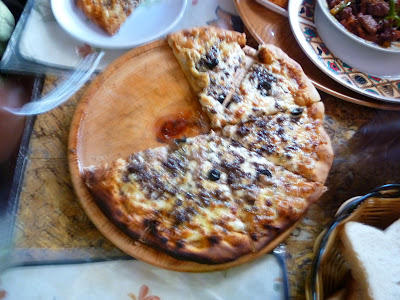 This little guy Hoovered down most of the pizza, so I figured I'd ask him to show off his belly.


In fact, they were so nuts about pizza that I let them play a "Pizza Maker" game on my iPod that my kids are crazy for.Fun stuff. 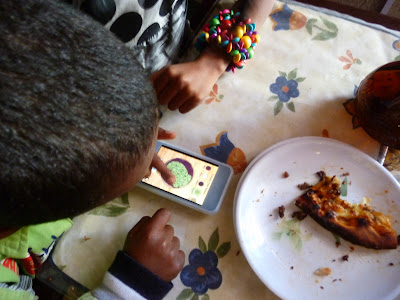 At some point Fatuma disappeared to conduct some business, so I burned time by handing the camera over to the kids.
So, I'm done right? Of course not. We returned to the market where more goods were acquired (this time for my fellow Canadians in Ethiopia) then we hit a jewelry store where she helped me pick out earrings and a necklace for my wife. (I was successful in paying for this one). 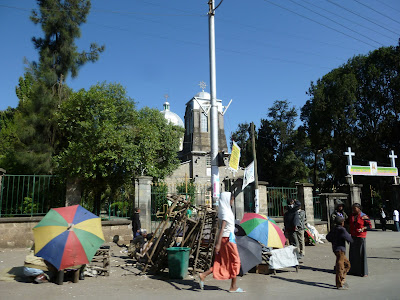 A couple of stops later (more shopping) and we finally rolled into the hotel at around 5:30 p.m., where she deposited me on a couch in the lobby. I felt like I had been subject to the most benevolent kidnapping ever, one in which my captor fed me like a prince and lavished goods on me. Anyways, even though I understood her extreme generosity I felt bad about it. But what could I do? I couldn't give her money, right? That's crass.

Then I remembered that I had brought a copy of one of Doug Wright's Nipper collections with me. Fatuma was talking about a library she was building back home in an Afar school she established (and we had visited) so I zipped up to my room and got the book. Famously, Doug Wright drew his classic Canadian strip without the benefit of words, so language wasn't going to be an issue. She seemed very pleased by the gift, but not as much as her nephew who grabbed it and was well and fully absorbed in the 1960s antics of Nipper and his family. 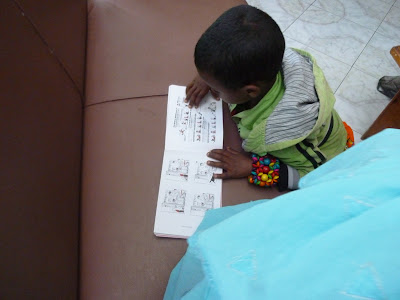 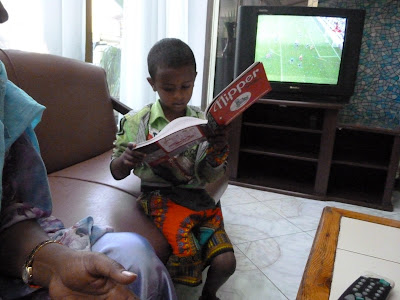 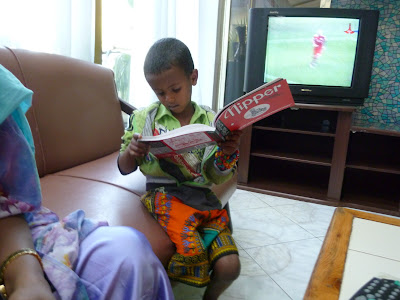 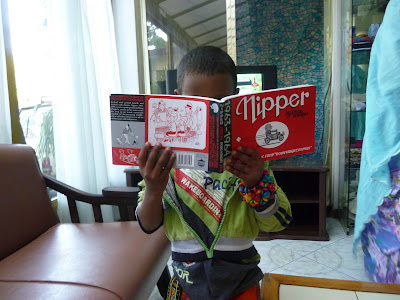 I swear, I think he may have liked this better than the pizza. And why not? Nipper's devilish antics have rung true with my kids and many others some 40 years after they first appeared, after all a kid is a kid, right? Anyways, it was a genuine thrill to see this Ethiopian kid, who knew maybe 10 words of English, devour this book. Here's to the global power of comics!!
Posted by Brad Mackay at 06:41 No comments:

So, for those who may not know I’ve been in Ethiopia for more than a week now on an (what exactly can I call it?) assignment/fact-finding mission/humanitarian junket. The basics: a few weeks ago I was offered a trip here by a Canadian charitable organization to see and hear the issues facing the Afar people, an indigenous group of nomadic Ethiopians who have existed in the Horn of Africa for more than 2,000 years.

So, last Friday I flew with a group of Canadians (which included two Afar-Canadians) to Addis Ababa and then drove 10 hours north to a remote Afar town called Samara. Lots of eye-opening surprises there like, who knew BlackBerry reached all the way out here? Or that a small truck stop called the Erta Ale –café could make such a good espresso?

Anyways, I’m currently back in Addis Ababa, Ethiopia’s sweaty, sweet capital city, and I can report that the coffee obsession continues. I’ve never consumed so much: it’s intoxicating and ever-present. Since the city is predominantly Muslim (or Orthodox Christian) you don’t meet over alcohol. Instead, coffee is the go-to ritual. Which makes sense, since it was discovered here.

So, this morning we headed out from our hotel, which serves a very good macchiato (a single costs the equivalent of 33 cents Canadian) and walked to Tomoca one of the city’s best coffee shops. 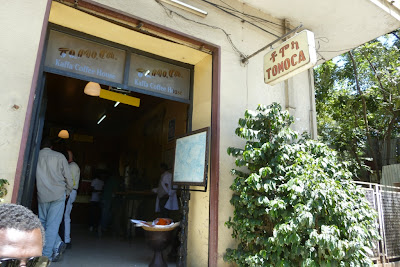 A brilliant little spot off of the thruway of Churchill Street, it’s a pleasant throwback to the coffee shops of Italy (which didn't do much pleasant here during the Second World War). Men stand around (no seats) and sip their coffee as they read papers and check their iPhones. Founded in 1953, the dance they make you go through is fantastic. You buy a coffee at the front (again, too cheap) and they give you a hard, square plastic tag that you bring to the bar at the back.

You give it to the woman there and tell her what you want. I had already had three machiatos, so we got espressos instead. Then the barista works his magic and you enjoy the results. Mine was deep, dark and sweet. You almost didn’t require sugar. Almost.

Anyways, that seems to be one of the dominant themes of my trip so far. It's like I’m like Hunter S. Thompson, but fueled to distraction by caffeine. Enjoy the pictures. Tomorrow: Nipper takes Addis!
Posted by Brad Mackay at 12:41 4 comments:

My piece on Montreal-based DJ and cartoonist Kid Koala is now up on the McGill University Alumni magazine website. I was a big fan of his music, say mid-90s, but had lost track of him so this was a great opportunity to play catch up.

Like most of us, he's done some growing up: he's married now with a three-year-old daughter. His music and art have matured a lot as well, with his new book and CD Space Cadet, turning out to be a real gem. Thoughtful and moving, it's been on steady rotation in my office and living room. He's touring it right now, so go check it out!

NOTE: Tomorrow I leave for an 11-day trip/work assignment in Ethiopia. Keep your eyes peeled on the blog for itinerant updates and pictures from the savannah. Wish me luck! 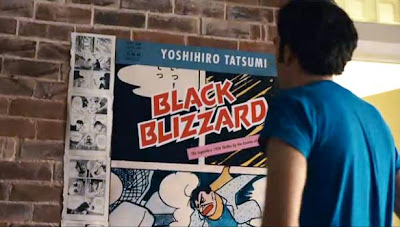 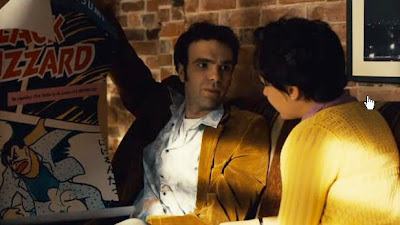