When I was preparing to move back to Ottawa a little over a year ago I harboured deep, sincere fears that I was leaving behind not only family and close friends, but any and all inklings of original artistic thought. Then I went back for a visit in September and bore horrible witness to the second annual Nuit Blanche festival, after which I realised my fears were completely unfounded. (Oy! And I thought Toronto was hurting for cash?)

Anyways, this thought struck me again after paying a visit to the latest work by long-time Ottawa artist Dave Cooper, who in a former life was a well-known alternative cartoonist. The work in question (which was being previewed at a local gallery before it headed to a show of its own in L.A. early next year) is called The Underbrush Octych and features Dave's luscious-slash-lascivious ladies in, "full bloom" shall we say.

Anyways, the truly interesting thing here was the construction of the work, which is 18 feet long and made up of eight individual paintings. They're hung on a custom-made track which allows the painting to be rearranged left to right and right to left, ad infinitum in a kind of loop, without the overall image losing it's flow. Here's my attempt at a shot of the entire piece: 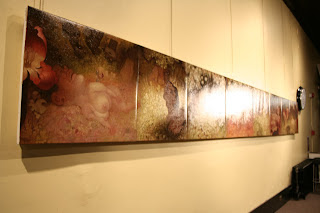 According to the owner of the gallery (he might have just been an employee) Cooper had started the painting in an effort to produce a series of smaller more affordable pieces. Then, the idea just kind of got away from him, and the series became part of a larger whole, which will now sell as such come February 2008. (Gee, i really hope he was the owner and knew what he was talking about.)

So as I was trying to convince the gallery guy to let me take some photos of this grand thing, the artiste himself showed up and I struck up a conversation. We had met years ago, via a mutual friend so we quickly caught up and I asked his approval to snap some photos and, uh, here we are. Me writing a blog post and you reading it. Isn't life strange?

So, make with the enjoyment the photos already! 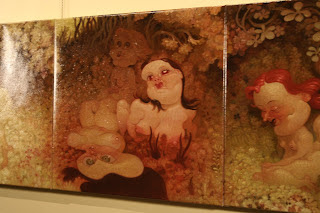 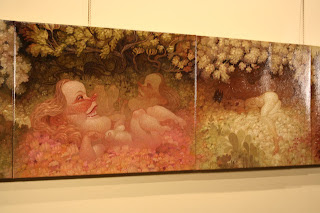 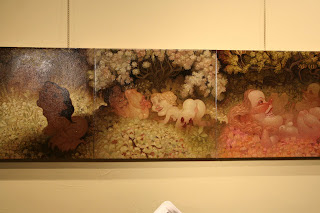 There are some more shots over at Flickr for your viewing pleasure.

*BONUS FACT* I looked up the term "octych" and I don't think it actually exists outside of some role-playing game from the 80s. Which of course makes me appreciate the artistic process behind it even more. Not to mention the artist himself: 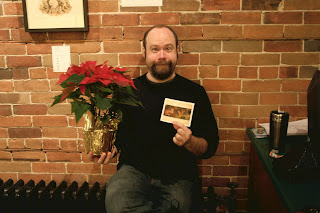 *EXTRA BONUS FACT* They apparently pulled out all the stops for the opening, trotting out a couple of fulsome gals with latex gloves to rearrange the art every 15 minutes as per a customized clock made by Cooper. You can see videos of this oddly R. Crumb like happening here, here and here.

You can also see the various stages of this work, from sketch to canvas, right here, courtesy of Cooper. 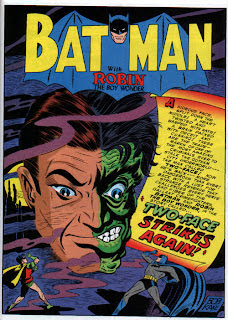 Just saying is all.
Posted by Brad Mackay at 22:03 No comments: