One of the best things about the once-great but now mediocre Comics Journal, was their monthly Swipe File column in which they exposed de facto comics plagiarism -- a practice that was, in fact, quite common among superhero cartoonists. Regardless of this, it was always fun and eye-opening to witness the inspiration behind some of your favourite comics, while visualizing a coffee-addicted cartoonist cribbing from an old pulp novel in an effort to meet deadline.
This all came to mind thanks to this still photo in the New York Times, which I saw yesterday. It's taken from a London play called Enron that's debuting on Broadway later this week. The play is about the financial disaster that was Enron, the once-great and greatly-troubled American energy company. Is it just me, or does it look like someone in set design was a big fan of Maus?: 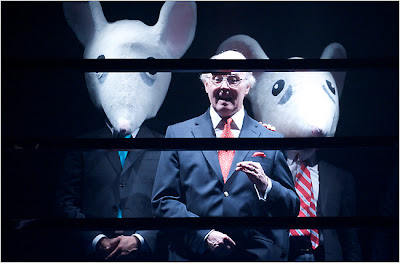 I mean, these two mouse-men are dead-ringers for Vladek and crew, don't you think? 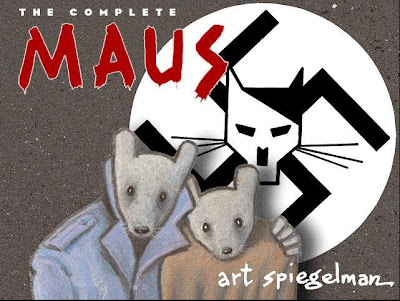 I hereby proclaim this a stone-cold swipe!
Posted by Brad Mackay at 10:57 No comments: