The professor, the ancient nomads (and me)

I'm happy to report that the first article to come out of my recent trip to Ethiopia is now in print in the May 2012 issue of University Affairs magazine. The piece -- "The accidental statesman" -- is a profile of University of Ottawa law professor Joseph Magnet (known in Ethiopia as "Professor Joe") who traveled  to Ethiopia last October as part of our five-man team.

As I quickly learned, Magnet is a tremendously smart (and funny) guy who for the past couple of years has donated his time as legal counsel to the Afar people, a centuries-old tribe of nomads who live today as an ethnic minority in Ethiopia and Eritrea. A well-respected constitutional law expert in Canada, up until this point Magnet had  kept his involvement with the Afar low-profile, preferring to talk about only with close friends and family. Luckily I was able to convince him to share his amazing story with the rest of the world.


And I think I'm not engaging in hyperbole when I call it Amazing. Magnet is comfortably ensconced as a legal authority in Canada and at 65 was not looking for a new cause. But as a man of passion, once he met and spent time with the Afar -- whose generosity of spirit was disarming even to me -- he readily offered up his expertise to them. What he's done since then has to be read to be believed.

I've had a lot of positive feedback so far about the piece, especially the opening which recounts a unique moment I was witness to  in a small town in Northern Ethiopia as we were on our way out of the Afar region. In a trip full of colourful moments, this easily took the cake for me. (That, and the time that Joe, frustrated by my journalistic intransigence, ordered someone to "Shoot that man and put his body in the truck!" I admit: I was being pretty stubborn at the time.)

As a side note, I was inordinately honoured to be informed by the editor of University Affairs that my article was the first to ever include the "F-word", unedited, in the mag's pages. (Stop! I'm blushing!)

As a bonus, here's a photo I took of Magnet taken during the meeting I describe in the opening of the piece. 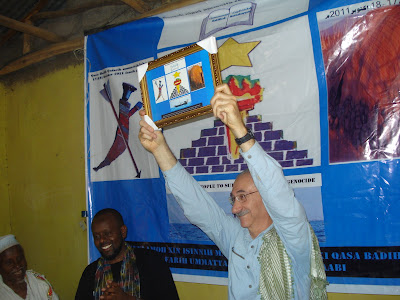 Another bonus, for those who enjoy the sound of my voice, University Affairs interviewed me about my trip and posted it on their site as a podcast.
Posted by Brad Mackay at 13:17