It’s a few days after a letter of protest from Chester Brown and Seth landed in the email boxes of the Canada Council for the Arts. Unfortunately since then, they haven’t had much of substance to say about the Skim debacle.

The last I heard (via Quill and Quire’s blog) the Canada Council’s Melanie Rutledge—head of Writing and Publishing—had rejected the idea of adding Jillian Tamaki’s name to Skim’s nomination, saying: “The horse has kind of left the barn, unfortunately, and we’re not really in a position to simply stop and re-do things.”

I’m not quite sure what she’s talking about, since no “re-do” is required: just a simple matter of bending the rules a little to add Jillian’s name on the citation alongside her cousin’s, Mariko. Rutledge’s reaction seems kind of pat and toothless, and smacks of the kind of bureaucracy that we have come to expect from faceless government departments not the august, artist-friendly Canada Council. (Their motto being "Supporting Canadian Creativity.")

Her reaction is doubly puzzling when you consider the thoughts of the jury members, who seem to agree that the GG process is flawed and in need of an overhaul.

Kevin Major and Teresa Toten, two-thirds of the jury for Children’s Literature – Text (the category Skim is nominated under), seem to agree that the situation Jillian finds herself in is a symptom of the fact that the GG’s long-standing categories are outdated. Toten, a Toronto-based author, told me this morning that she thinks the process is “imperfect and imprecise” and that the events of this past week have been “a learning opportunity, for me and the Council.”

Admittedly not well-acquainted with comics and graphic novels before she was asked to be a GG judge earlier this year, she stressed that she thought Skim was “a stunning piece of work” and expressed regret that one of it’s creators was feeling snubbed by their decision.

I’m sure if they had a flux capacitor and a DeLorean handy, the staff in charge of applying for awards at Groundwood Books/House of Anansi Press (the book’s publishers) would fly back in time in an instant and undo what I see as the initial, grave miscalculation. By submitting to these outdated categories, they kind of guaranteed that either Mariko or Jillian would be snubbed. Maybe they thought a comic didn’t have a chance anyway, and decided to hedge their bets by pretending that Skim was an illustrated kid’s book?

Anyways, I also talked with Major via email in St. John’s, Newfoundland. Also an author, he was very forthcoming about what he thought was wrong. When asked where he thought the fault lied, he said:

"The book was submitted within the present classification system and guidelines, which the publisher was well aware of. We were asked to consider the word text only, and could really do no more than that in submitting our shortlist. I would say there has been an awareness among juries (past and present) that it is an imperfect system, for picture books as well as graphic novels, since in both cases the two elements (words and images) work in unison. However, that debate has been on-going for years (at least back to the 1970s), long before graphic novels were in the mix. As have other debates about the system, of judging YA [young adult] fiction in the same category as books for 5-year-olds, as an example."

And, a little later on:

“In the case of SKIM, the artwork of many of them conveys parts of the story that the words alone do not. In my opinion the drawings in the best picture books, as those in graphic novels, do not simply illustrate text, but are equal in their contribution to the telling of the story…SKIM is indeed a wonderful book, with two contributors of equal merit.”

While both jury members sympathize with Jillian’s predicament—and acknowledge the arguments made in the open letter—they stopped short of saying her name short be added to the nomination. Considering how much they liked Skim, and the crucial role that Jillian’s art plays in it, not formally acknowledging—even at this late point in the process—seems like losing on a technicality.

Major did however close out his email with this small light of hope:

“No doubt this matter will be raised at the next GG awards meeting of the Council. Maybe it is time to rethink the classification system. If the protest is loud and long against what is in place now, then the Council would have no choice but to rethink it.”

So, speak up comics fans! Blog your heart out or contact the Canada Council now! Vote early, vote often!
Posted by Brad Mackay at 17:03 2 comments: 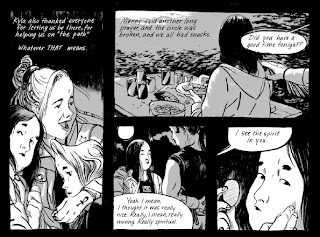 At last, the truth can be told

If memory serves, this was one of the possibilities floated out by me and my buddies back in the summer of '77. (courtesy The Onion): "Burned Lower Half Of Mort's Face Revealed In 'Bazooka Joe' Stunner""

"Bazooka Joe has always been about mankind's search for meaning in a world marked by pain," said staff artist Martin Shore, who claimed that the idea for Mort first came to Gelman after he watched entire villages burn to the ground in the Philippines. "Sure, the sight of Mort's charred and blackened jaw may shock some of our readers, but maybe they should be shocked. Maybe it's time they woke up and realized the true, unrelenting nightmare that is our very existence."
Added Shore, "If they don't like it, they can buy another fruit-flavored gum."