George Feyer ranks among the greatest obscure cartoonists in North America. A WWII Hungarian refugee to Canada who brokered his passage (and survival) across the Atlantic by forging his own passport, Feyer quickly became the rarest of rare birds - a celebrity cartoonist.

A fixture in newspapers (Feyer's Fair), magazines (Maclean's) and TV (he was all over the CBC, on kid's and adult shows) Feyer was a force to be reckoned with. Possessing a quick-draw style, he lampooned everything and everyone (including his adopted country) and became a fixture in the literary world, socializing with the likes of Pierre Berton and Lister Sinclair.

By the mid-1960s he had grown frustrated with the limitations he saw holding him back in Canada, so fled Toronto for New York City (where he befriended young writer Woody Allen and comedian Lenny Bruce). Later still, he up and moved to Los Angeles where he planed on getting into movies. That would never happen unfortunately, as he became deluded and killed himself  in 1967 in an apartment festooned with his creatively intense - and intensely creative - drawings. (Here's Sinclair's poignant eulogy to Feyer.)

In his short but bright career, Feyer blazed a wide swath of material from books to a line of ceramic crafts (!?) much of it lost to time. So you can imagine how pleased I was to find this great book, George Feyer's Stamp Book, online recently. The gimmick with this is simple and very well-executed: Feyer took postage stamps from around the world and drew silent gag cartoons around them. 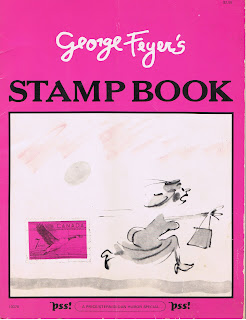 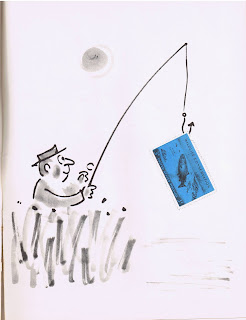 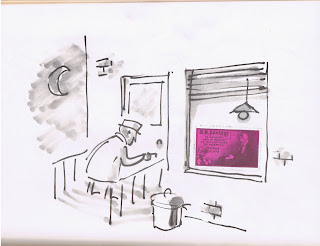 Even the back cover bears the mrak of Feyer, who thought of a clever way of communicating the publisher's name: 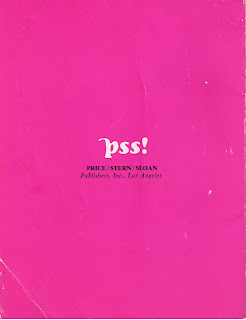 I've thumbed through this book often since I got it and each time I'm happy I did. So simple, yet so sublime, it's cartooning at it's finest. (I'll put more scans up soon. Just doing these kind of killed me, given that the binding is so cheap the pages were coming loose. But it's worth it if his work gets into a few more heads.)