First, it was Mr.Blackwell. Now comes news that another pop culture icon my fast receding youth ( I turn 40 next month) has passed. I just heard that the great Rudy Ray Moore is now the late, great Rudy Ray Moore. The man behind such improbably durable movies as Dolemite, Petey Wheatstraw the Devil's Son-In-Law and Avenging Disco Godfather (my gateway drug to his bizarro oeuvre), Moore was a singular creation of the 1970s.

Equal parts sex symbol, stand-up comedian, MC, auteur, aspiring actor, anti-drug crusader and African American agitator, it's a good bet that Rudy Ray's movies seemed as strange to black audiences as they did to white. Riding the polyester coattails of Melvin Van Peebles breakout 1971 film Sweet Sweetback's Baadassss Song, Moore unabashedly embraced the "Blaxploitation" genre like no other before or since.

While the producers behind such blockbuster studio films as Shaft strove to duplicate some of the seriousness of Pebbles' success, Moore would have none of it. He took the basic Angry Black Man premise of the genre and exploded it in a mash-up of soft-core pornography, profanity, slapstick comedy and badly choreographed kung-fu. As you can expect, this was manna to my 17-year-old self. (He also made albums!) 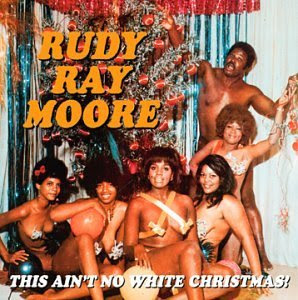 I first came across RRM's films in the late 1980s in a Jumbo Video in my hometown of Ottawa. Having already watched the entire Shaft (including the under-rated Shaft in Africa) and Superfly series, my friend Glenn Sheskay and I were aching for a new fix. That's when we discovered the "Super Action" racks at the local video superstore. I'm not sure how - or why - they came into possession of them, but they had every Rudy Ray Moore film ever made. I vividly remember watching Avenging Disco Godfather for the first time. I completely lost my shit: The movie is a gonzo combination of goofball comedy, rudimentary rapping, and brutal violence (racist cops and hoodlums are killed without mercy). In quick order it melted my brain and moved my heart.

We tried our best to spread the word about Moore's legacy, but our friends were likely worn out with the results of our increasingly strange cultural excavations (or they were too busy smoking dope and having sex. "Losers"!). More than a decade later I was shocked to witness a renaissance of sorts for Mr. Moore; one that culminated in me meeting the man himself at a showcase of his work in Montreal in 1999. He was in full-on Dolemite mode, telling off-colour sex jokes in front of a crowd of university kids (many of whom left in disgust), while hawking flimsy back-scratchers with his logo on them (he had hired a flunkie to actually walk around the theater to sell them). I only wish he had been selling this great onesie at the time: 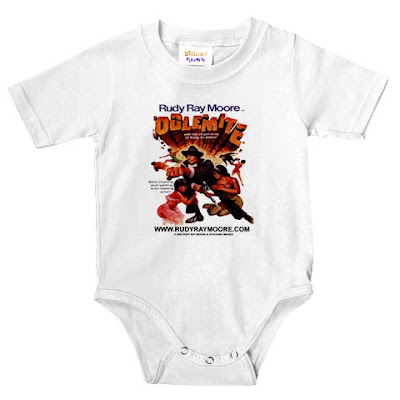 It was a moment of affirmation -- at least for me -- to see the 71-year-old Moore up there, using his moment in the sun to hype his latest film. A showman to the end.

Sure wish i would have bought one of those back-scratchers though.......
Posted by Brad Mackay at 12:47

Great post. This is the first I'm hearing the news of Moore's death. My high school friends and I went through a similar obsession with him, but in 1993. I always had a queasy feeling about being a white kid in the suburbs and watching him and laughing. But I think he somehow transcended politics and in a way was anticipating a white audience's reaction and laughing back at them first.

Thanks David. Moore's legacy is indeed a strange thing to reflect on, I mean - how did his movies wind up in suburban video stores anyways? Doubt they're at your local Blockbuster now. As for laughing at him, i see him in the same lineage as Ed Wood or Russ Meyer - a single-minded auteur with more energy than talent. I don;t think he cared who laughed at him, as long as you were wtaching!