Getting dressed by Seth

Contrary to what you may believe, my involvement in The Doug Wright Awards is not all parties, showgirls and celebrity hobnobbing. Most of the time it's a lot of grunt work, anxiety and stress. Which is okay; after all, no one was exactly begging me to start up a Canadian comics awards back in 2004. So I can't/shouldn't gripe, right?

Still, it can be a lot of work sometimes. Then there are times when it seems to all pay off; like today when I received an unexpected package in the mail from Seth (the "Creative Director" of the Awards).

As you probably know Seth designed a lot for us over the years, starting with our distinctive awards to a set of buttons and even a t-shirt. So it shouldn't have surprised me when I opened the package and found this: 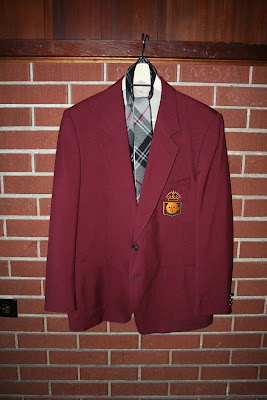 According to the note included in the package, this is the official Doug Wright Awards club jacket to be worn by the organizations director (me) on the night of the awards ceremony. The plaid tie came with. Talk about spiffy! The image on the breast pocket is an embroidered version of our new logo which will debut on our new website in the coming weeks): 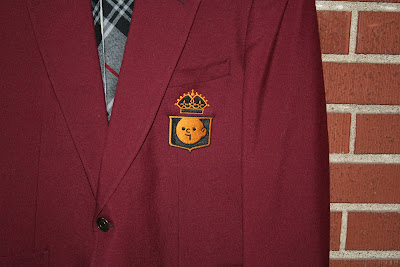 You know, the last time I was told how to dress I was about 10-years-old.  But somehow, I'm willing to make an exception in this case. Thanks Seth!
Posted by Brad Mackay at 13:10