A Potatoe in your stocking

﻿Last year The Globe and Mail became the target of a heap of online scorn after they published their Globe 100, a curated list of the best books reviewed in their pages in the 2009 calendar year. The issue? They chose only three comics work, Asterios Polyp, R. Crumb's The Books of Genesis Illustrated and Logicomix -- none of which was Canadian. This in a year that featured major release by Seth (George Sprott) and a massive reprinting of one of the country's greatest cartoonists.

I think we're all pleased that this time around their choices comics-wise were a bit more inspired, considering they included the Doug Wright Award-winning Hot Potatoe by London, Ontario's Marc Bell. A stranger more inspired choice out of the past 12 months I cannot think of at the moment. Can you imagine the stunned look on your Great Aunt Lou's face when she cracks this beautiful chunk of weirdness out from under the Festivus pole this year? Thank you Martin and crew! Well done. 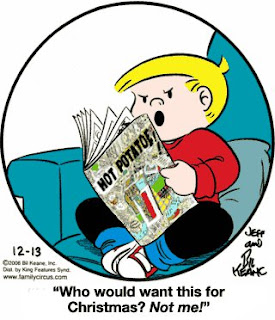 The bastardized Family Circus cartoon above is pulled from Marc's site.
Posted by Brad Mackay at 16:32