Well, since Chris Oliveros has officially made public Drawn and Quarterly's plans for their Doug Wright property I figure I can now talk about over here as well. The first book to debut (this September) will be Nipper: 1963-1964 and will pick up directly where The Collected Doug Wright: Canada's Master Cartoonist left off. Each book will collect two-years worth of strips and will feature Seth's able design work (see below for a non-final draft of the cover). 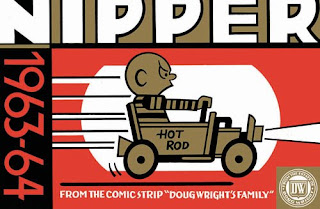 A preview of the book is over here.

I also contributed a brief introduction which serves to set the scene a bit for this fertile period in the Canadian cartoonist's career. The beauty of this new format is that it echoes the previous publishing history of Wright's work, mainly two cheap (but very popular) collections of his Nipper material that appeared in the 1960s and 70s. The landscape layout of the book is even the same. The difference this time around is that the D+Q books will be high-quality - just the way Wright intended them to appear - and they will contain dozens of strips republished for the first time ever.

The other bonus is the cover illustration of Nipper motoring away in his "Hot Rod." As a kid I was obsessed with this go-kart and was inspred to build several of my own for local parades etc. None ever looked as cool as Nipper's though.

And fans of the Bed Red Book, fret not. Seth, Chris and I are fully committed to publishing Volume Two a few years down the road. Be patient!